This article is the third in a four-part series that addresses the new tax law and some of the impact it will have on deducting business expenses for companies that purchase heavy equipment and need equipment financing. This was an interview conducted by Mark Lempko and Don Pokorny, both of CCG, with Dixon Hughes Goodman LLP (DHG). The information conveyed herein is meant to be informative and should not construed as specific tax advice.

CCG: Let’s move to the expense and deductions. There is a little uncertainty on the impact on meals and entertainment expenses. Have those been modified?

DHG: The biggest change is that, before when you could claim up to a 50% deduction, now is no longer deductible for entertainment expenses. There are a few changes to business meals. Certain meals that were once 100% deductible are now 50% deductible or in some cases not deductible.

CCG: Are there any changes to the automobile expense, for example it’s typical to have a suggested rate of cents per mile? Are there any modifications in that provision that you know of?

Nathan (DHG): Not that I am aware of.

David (DHG): The only thing I can think of is that if you are an employee and you have reimbursed employee business expenses, generally a lot of people use their car, that was once an itemized deduction for tax purposes. And Nathan, correct me if I’m wrong, I believe that has gone away and is no longer being allowed.

Nathan (DHG): That is one of those miscellaneous itemized deductions, so you are correct.

David (DHG): So, people that were historically using their car and claiming the deduction on their own personal return are now going to have to look at it a little bit differently.

CCG: Ok, so there is a fair amount of uncertainty to this, especially to our customer base, relative to the expensing and business interest deductibility. We understand that there was a reduction, but it is tied to a formula. Anything that you can add relative to how this change came about and what the formula is and what the impact will be relative to borrowing money?

Nathan (DHG): If your customers have a significant amount of interest expense, that deduction could be limited going forward. Before tax reform, business interest deductions were generally not limited except in very specific circumstances. It’s a layered calculation similar to the pass-through deduction, but the simple answer is that interest deductions are now generally limited to 30% of adjusted taxable income. So, it’s before NOL, before interest expense, before pass-through deduction, and importantly it’s before depreciation and amortization. Which sets the threshold higher, allowing you to get to this adjusted taxable income number. So essentially, it’s EBITDA (Earnings Before Interest, taxes, depreciation & amortization).

CCG: Understood, which we use quite often.

DHG: Yes, roughly speaking, 30% of EBITDA plus some other things.

DHG: Once your interest expense hits that threshold, that’s the total you can deduct this year, and the excess carries forward to future years.

CCG: So, there is a carryforward?

CCG: And is there any phase out or is it open ended?

DHG: That’s where this gets particularly ugly. The year escapes me at the moment, but in about 3-5 years, that EBITDA becomes EBIT. (2022) You do not get the benefit of increasing that threshold by backing out your depreciation and amortization. So, in a few years you are only adding back interest and taxes.

Nathan (DHG): That interest expense ceiling/threshold is going to drop down a good bit if the depreciation is significant. If you think about the full expensing of property, you’re expensing 100% of assets, that’s all reduced and going to come out. There is a balancing act that your customers are going to have to play on the full expensing and how much interest they want to deduct.

David (DHG): It is also quite interesting on how it was drafted. If you have a series of businesses in separate legal entities, and let’s say you leverage one and the other two are pure equity and the leveraged legal entity has a suspended interest expense deduction, you can’t offset against the other legal entities that you may own.

DHG: In other words, we call it cross-collateralization. They prohibited that from occurring. So, the entity that generates the suspended interest, has to generate the excess income in the future to utilize that suspended loss.

CCG: That’s a challenge. Many of our entities use equipment holding company structures. They generally charge a nominal rent and typically will have tax loss. And it’s carrying all the debt and subsequent depreciation. There is some real planning that will have to take place.

Nathan (DHG): Correct. In certain instances, it is more worth your while to not claim the full expensing bonus depreciation and claim depreciation instead because you are eventually going to get your deprecation regardless. Whether you claim it in year one or over seven years, you are going to get that depreciation. But factoring that into this EBIT calculation, when maybe we don’t want that full expensing, maybe we need a higher taxable income threshold, so we can claim some more interest expense deductions. There is a give and take there where you may not want to claim the full expensing, but you have to have a longer time window that you’re paying attention to. I know a lot of people will just look at the current year when they are buying a piece of equipment, asking, “How much can I deduct this year?” But if you look at a 7-10 year period, you may pay less total tax by making different decisions.

David (DHG): Before we go too much further, Nathan, I think it is important to talk about the threshold for these rules. It may be that CCG’s clients and customers may not be pulled into this.

Nathan (DHG): Good point. There is a threshold on the interest deduction limitation, so if you’re a small business, you’re exempt from having to apply that limitation. That threshold is average annual gross receipts for the prior 3 years less than 25 million dollars. If you have related parties, like holding companies and operating subsidiaries beneath it, you may have to aggregate those together.

CCG: And that test is done on the gross revenues?

CCG: If I have a customer that hypothetically has 8 million, 9 million and 10 million in sales 3 years, which aggregates to 27 million, he’s over the threshold or is it the average of those 3 years?

CCG: So, he would be nowhere near the threshold?

CCG: That’s exceptional because that 25 million is a much broader exemption than I thought.

DHG: And that is a new small business relief that this bill provides. Previously, small businesses were defined for those with 5 million dollars average annual gross receipts. Pushing it from 5 million to 25 million, gives the benefit to a whole lot more companies.

CCG: Absolutely it does.

CCG: Did you say, though, that multiple related entities need to be combined? I you have 3 entities of similar size ($8 million, $9 million and $10 million in sales), and they are basically under one umbrella, then they are over the $25 million threshold?

Nathan (DHG): That is correct.

David (DHG): If you have an operating company and an equipment holding company, you would push those together and average them. There are some specific rules as to who gets pulled into that calculation and who does not.

CCG: Is it based on common ownership?

David (DHG): “Related party” might be a better word to use, maybe not the technical term, but you’re right. Think about why they did what they did. They didn’t want someone managing the receipts levels among their entities, so they wouldn’t be subjected to this interest expense disallowance.

CCG: Understood, they are “always cutting off the opportunities”. Anyways, that is all great information. I just learned a ton there. 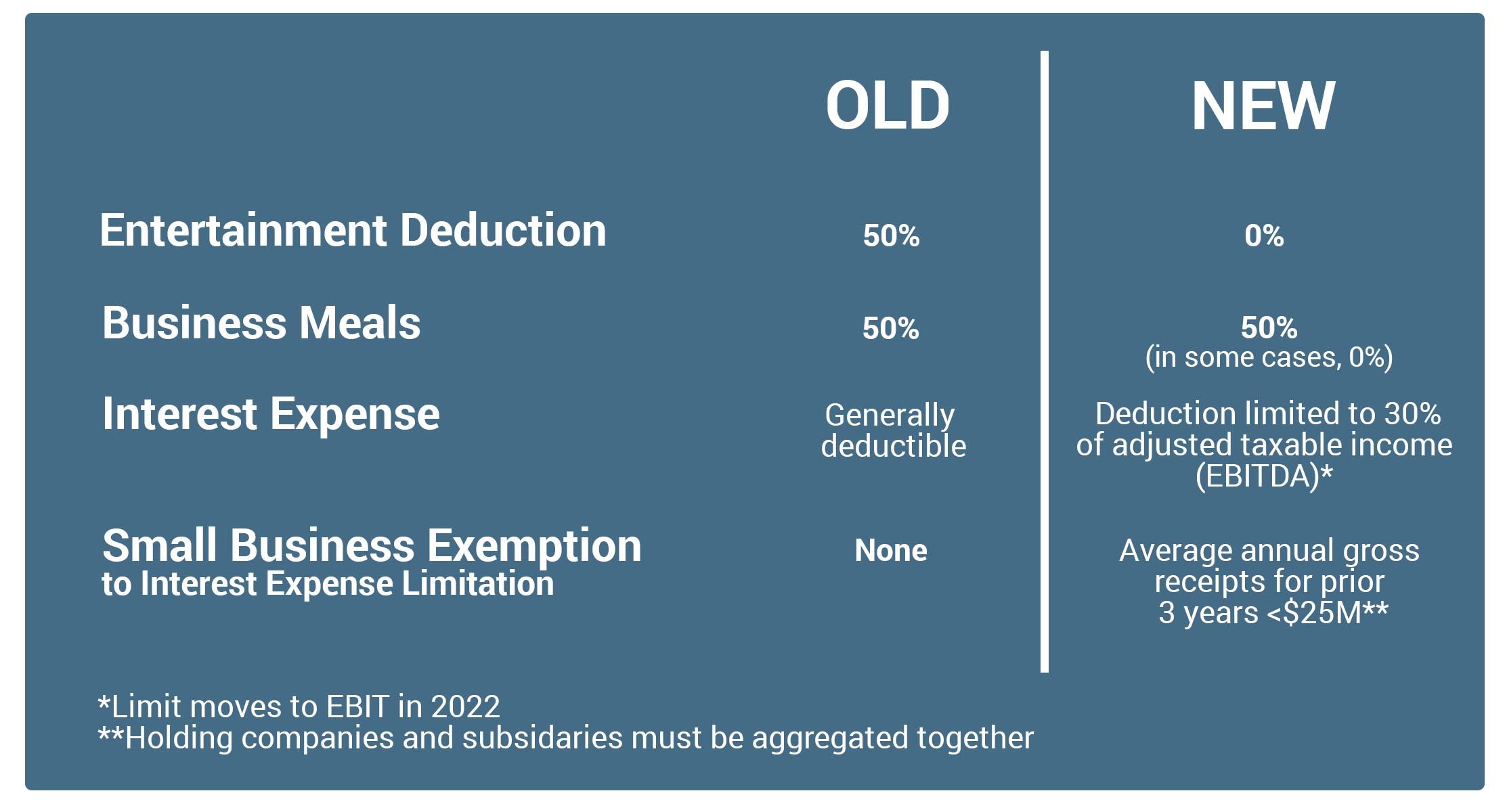 Keith Davis works specifically in financial services, primarily with banks. He works with CCG on corporate tax matters for federal, state and international.

Nathan Clark is a Tax Partner with Dixon Hughes Goodman in Charlotte, has experience in tax accounting methods and is heading up tax reform for DHG.

Mark Lempko serves as the Senior VP of CCG’s Northeast and Canadian Regions with over 30 years of experience in the equipment finance industry.

Don Pokorny serves as the Senior VP of CCG’s Central and Western Regions with over 30 years of experience in the equipment finance industry. He also is an Illinois licensed CPA.

The information contained herein is for informational purposes only. For specific tax advice, contact your local tax advisor or tax attorney. This post is the third of four in a series. Subscribe to our blog for notifications on the next posting or read the other posts in this series: